OECS Education Reform Strategy recognizes that “every citizen in this and the next generation will need to have a high comfort level with technology to live in and contribute to a society increasingly part of an interdependent wired world”. However, for many Saint Lucians, save the upper, middle income and urban, young professional class, there was still a gap in the trust, proficiency and reliance on ICT in day to day life. The rural, elderly and Creole-speaking populations were particular disadvantaged in this regard.

It would not be enough to merely support with Public Relations the existing activities of the project to develop Information and Communication Technology (ICT) spaces in schools and communities that expose students and citizens to resources that foster economic diversity and positive social development. An entire campaign was needed to sensitize and educate specific target groups (particularly the ICT reluctant) and the general public on the benefits of integrating ICT into their daily lives. We also realized we needed an interactive activity that would benefit communities at the grassroots level long after the project was over.

We went beyond just the specific deliverables and included a full Public Awareness plan to generate awareness of the Education Enhancement Through ICT Programme (EEICTP) by publicising the various activities and achievements of the project through public relations materials and activities such a newspaper columns, newsletters, press and video news releases, media appearances, press briefings/launches/events; commemorative magazine; conceptualized, executed and dissemination of campaign materials (e.g. posters, television and radio PSAs. These were done in English and Creole. However, the most important components were our conceptualization and execution of an inter-school ICT-based oratory competition for eight (8) primary schools and the ICT community challenge with the collaboration of sixteen (16) branch libraries across the country. The websites created by citizens to promote their village were a huge success. We provided monitoring and evaluation component where two (2) primary methods of evaluation were undertaken – output which was monitored through progress reports and the Project Management Oversight Team, and impact through a baseline and tracker surveys. 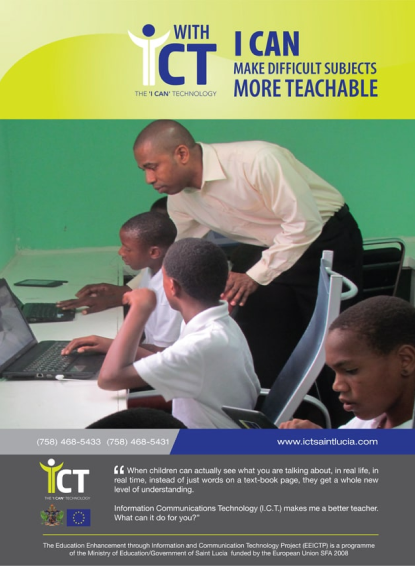